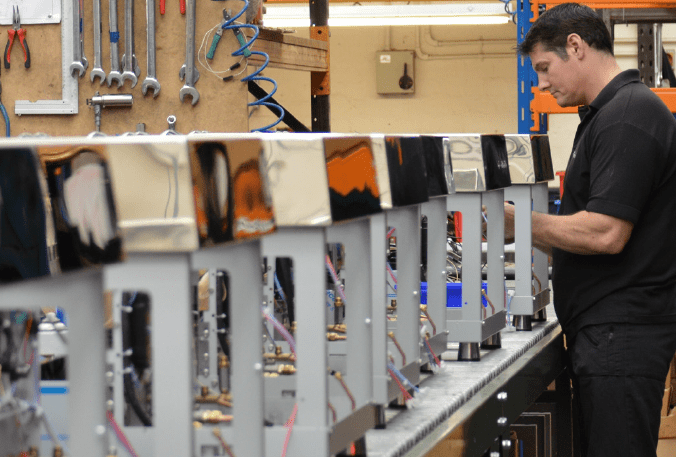 Fracino and Sage find the right blend for success

Success in business is invariably a prelude to new and bigger challenges. With a pioneering track record of more than 50 years of manufacturing traditional coffee machines, family firm Fracino has trusted Sage solutions to help ensure growth remains manageable. MD and owner Adrian Maxwell explains why.

“We actually originally started with the old DOS-based Sage system going back to the 1990’s when we first changed to computerised accounts. Until that point, we were a purely manual system and it was a big step forward for us to find an easier way of tracking accounts and seeing who owed what. It revolutionised us, really. Then of course, as with everything technology related, software changed, DOS disappeared and we moved over to Windows and put Sage 50cloud in place.”

Sage 50cloud served Fracino well over a number of years yet inevitably, as the company continued to expand, new challenges emerged.

“The business kept growing,” Adrian continues, “ which meant the current solution struggled to keep pace as the business continued to grow. As a manufacturer, we have components, materials, stock control, MRP systems, whole work-order processing, inventory, stock lists and more to keep track of, and we had multiple systems in place to get those jobs done.

“After looking at several systems that didn’t quite tick all the boxes, we made the move and upgraded to Sage 200.”

“I can’t see us ever moving away from Sage. It’s exactly what we want and new modules and new functionality can be added on at any time.

We know that we’re only using a fraction of its power at the moment, so there’s plenty of room for future innovation. I honestly can’t think of anything we might want to use it for in future that it couldn’t do.”

A review was clearly called for. After due consideration was given to the alternatives, the decision was made to migrate everything to Sage.

“We looked at several systems that didn’t quite tick all the boxes. And we were already familiar and confident with Sage, which had a bearing on our decision to move to Sage 200cloud.”

The decision also prompted a review of available support to help implement the new and more fully-featured system. As Adrian explains, that was a process which led to the beginning of a very productive partnership: “At that point we also had to look at working with a partner and Sage introduced us to a number of accredited Business Partners—one of which was CPiO. When we met with the team at CPiO they were streets ahead of the others. The team recognised immediately that we were a manufacturing business, they’d set up comparable systems for other manufacturing companies, and they’d been in the industry before and understood the sort of challenges we face, 100%. That level of understanding was probably the determining factor in staying with Sage and choosing CPiO as an implementation partner.”

The move to Sage 200cloud represented a significant investment, with a critical role to play in safeguarding future growth for Fracino. One of the first tasks was to thoroughly test the new solution and plan the project: “We put in a three-month plan to implement the system, get it up and running, and plan for the future. It was a big job and yes, we’ve had a few gremlins along the way, and we’re still tidying and perfecting the system even now, two years on. But I would say it’s about 95% there now. In fact, Sage 200cloud is such an integral part of the business today, we’d face real challenges without it.”

Being “95% there” has already meant significant positive business outcomes being achieved throughout the organisation. As Adrian sees it, nowhere is that more significant than in gaining control of stock. “The key factor for me running the business and overseeing everything is that cash is king, which means that understanding what stock we hold is absolutely critical. Before, we just didn’t have a handle on stock control. Now we do.”

The benefit is measurable

“We know where everything is, and we haven’t got people double-ordering stock – which was another common problem in the past. In the old days, we had situations where we would buy stock in, stack it somewhere, lose sight of where it was, then order more and a month later find the old stock where it had been all along. So we would have wasted a lot of money on stock that was just sitting on a shelf. Simple things like that have been alleviated and it’s made a huge difference. Probably a reduction of 15% or 16% in stock levels. That’s massive for the business.”

Management is about measurement and Sage 200cloud has given Adrian the ability to better monitor and manage his entire business: “Putting the whole manufacturing process under one umbrella with the customer records is really improving the end-to-end control we have. It’s just helped enormously – from the production plan to business reporting.”

Clearly, the combination of Sage technology and CPiO support is proving to be a successful blend for Fracino. The company is already developing plans for a shared future.

As Adrian Maxwell concludes, Sage 200cloud is now part of the business: “I can’t see us ever moving away from Sage. It’s exactly what we want and new modules and new functionality can be added on at any time. We know that we’re only using a fraction of its power at the moment, so there’s plenty of room for future innovation. I honestly can’t think of anything we might want to use it for in future that it couldn’t do.”

Find out more about Sage 200